How to save time by using keyboard shortcuts for scientific symbols

How to save time by using keyboard shortcuts for scientific symbols 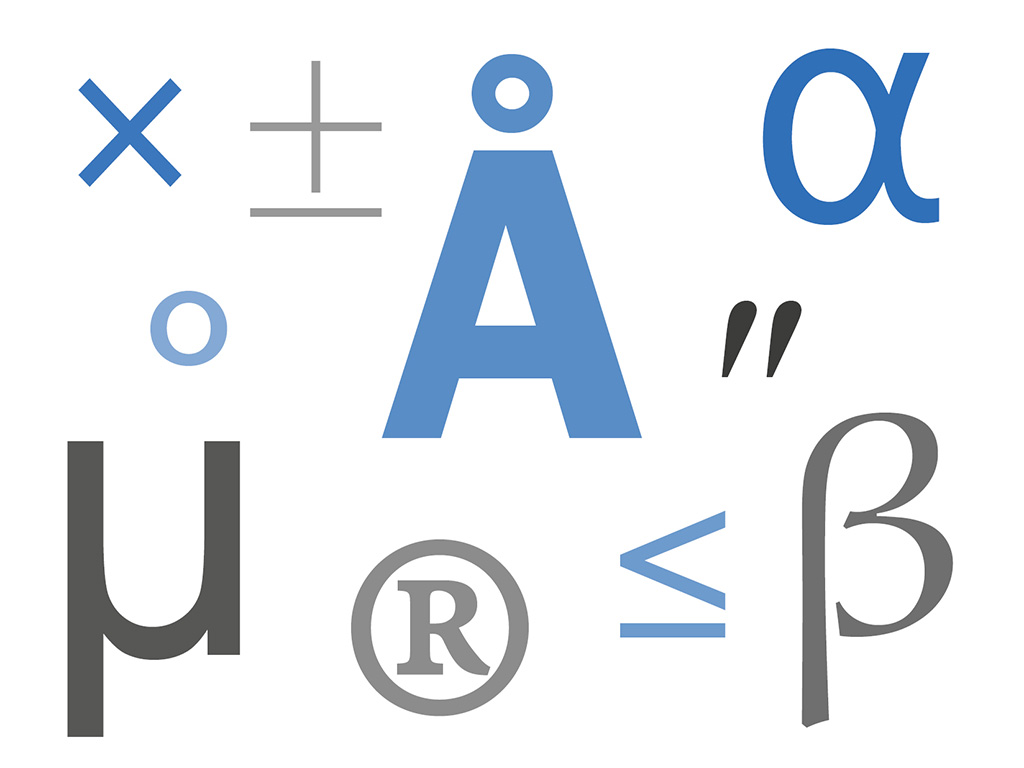 Correct use of scientific symbols is essential to make your document look professional – but do you ever wish you didn’t have to constantly scroll down through the Symbol palette looking for your chosen character? If this is a familiar frustration (and you‘re working in a full-capability app such as Word) then it’s worth trying ALT codes instead. To help you get started, I’ve selected the symbols that I think are the most useful in scientific literature.

Before we start – Using the numberpad

Most of the shortcuts I’ve listed below use the numberpad – all you need to do is to ensure ‘Num lock’ is on, hold down ‘ALT’, and then key the digits to get the symbol (or ‘glyph’ to use the correct terminology).

If you’re using a keyboard that doesn’t have a numberpad, then it’s still possible but just a bit more fiddly – while holding the key marked with a coloured ‘Function’ or ‘fn’, press and release ‘Num lock’, and then use the keys that have numbers in the same colour.

Now that I’ve covered that technicality, here are my top symbols and their shortcuts:

For many years, the go-to method for getting Greek letters was to key the Roman letter, and then laboriously change the font to Symbol (‘a’ for alpha, ‘b’ for beta, etc.). But Greek letters are now encoded in many common fonts, so you can achieve a more consistent appearance by using the following ALT codes to generate the symbol instead. They also avoid the problem of your symbols changing back to the Roman letters if you later decide to change the font used in your document!

So-called because it’s the same length as a letter ‘n’, this is my most often-used shortcut, largely because I love a good n-dash. Ideal for everything from numerical ranges (e.g. 10–20 kg) to multi-person scientific methods (e.g. Bose–Einstein condensate) and mixtures of chemicals (e.g. dry ice–acetone), it also doubles-up as a minus sign.

Chances are you may not be familiar with this slightly longer version of the dash. However, it is widely used in US textbooks, unspaced, to delineate a parenthetic phrase—as I’m illustrating here—in places where a spaced n-dash – as I’m illustrating here – would otherwise be used. But in a scientific context, I think it is also an elegant symbol for marking an empty cell in a table (a ‘null value’).

If you’re still writing a letter ‘O’ or ‘o’ and then superscripting it – or even digging out the Romance-language masculine ordinal indicator (º) – then save yourself some time with the keystroke for the proper thing.

This symbol for ‘micro’ is to all intents and purposes exactly the same as the Greek letter mu in all fonts I’ve come across (see above), but whichever code you opt for, it will give your work the professional touch through use of units such ‘µm’ rather than ‘um’.

To indicate numerical tolerances, this elegant symbol is far superior to the clunky +/–.

Like a raised full-stop, the middot is useful for separating individual parts of a compound unit (e.g. viscosity in Pa·s), or for representing water of crystallisation (e.g. CuSO4·5H2O).

When you don’t want to cause confusion by using the computing code * (or resort to a regular letter ‘x’), this keystroke is what you need.

A bit like a quote-mark without the curly tail, this symbol is rarely used outside of mathematics – but indispensable within it!

Mathematicians will also be familiar with the double-prime, but it’s also used to mean inches – so for any of us who might be tempted to use double-quote marks, boost your credentials (at least amongst punctuation pedants) by using the real thing instead.

It’s always worth making sure that trademarks are correctly represented, and using this or the following symbol against trademarked names in your literature (at least at first mention) will ensure that no misunderstandings arise. Rules vary from country to country, but in general this particular trademark has no legal significance, and is generally used to dissuade others from using your product name. The symbol normally comes raised off the baseline, so there’s usually no need to superscript it.

In contrast to the previous symbol, this variant (in which a capital ‘R’ sits inside a circle) is used for products that have been legally registered in a country (usually for a fee). In a few fonts it’s superscripted already, but it others it sits on the baseline and you’ll need to superscript it manually.

This is a handy symbol where space is tight, and avoids potentially confusing usages like <=.

There are a plethora of inequalities available using ALT codes, including such wonders as ≹ (ALT-8825), but this is one of the more useful.

In the rare event that the precision of a number isn’t quite what you’d like, then this symbol may come in useful.

Amongst the wide variety of arrows available (in some fonts at least), this one is perhaps the most useful, for showing transformations or chemical reactions.

As well as all the scientific symbols mentioned above, there are ALT codes for a large number of other glyphs, including:

You can find complete lists of ALT codes at https://usefulshortcuts.com/alt-codes.

By the way, if you find that the ALT code doesn’t give you the correct symbol, then it’s very likely because it isn’t encoded in the font you’re using, or you’re using a platform that doesn’t support ALT codes. In that case, you’re best-off trying the Windows Character Map instead, available under ‘Windows Accessories’.

I hope you found this blog post useful. If you need any advice on working with scientific symbols in your documents, please do get in touch and I’ll be happy to help you.